Fermentation is one of the most important steps when making homebrew beer and many brewers might wonder if the primary fermenter needs and airlock or if it should be airtight. Since I asked myself the same question on my first batch, I thought that I should tackle that question today!

The primary fermenter should never be airtight because the carbon dioxide produced during fermentation needs a way to escape safely without building up too much pressure. While not required, using an airlock during primary fermentation will allow excess CO2 to leave the fermenter and prevent oxygen and bacteria from entering.

Even though you don’t have to use an airlock during fermentation, most people choose to do so as a cheap insurance policy against infection and blowouts. Let’s dive deeper into this topics and see what we can learn!

Is an airlock necessary for brewing?

No, an airlock isn’t an absolute necessity for brewing, but it is pretty darn helpful.

I say helpful because we all know that a major by-product of the fermentation process is carbon dioxide and if you have ever seen beer ferment then you will know that the process will produce a LOT of gas. Since there is only a finite amount of space inside the fermenter, that extra gas needs a place to go. Hence, we need a way to allow the carbon dioxide to escape.

The other part of the equation is that while oxygen is helpful when the yeast get started with the fermentation process, it can actually hurt the flavor of your beer if it is introduced after fermentation slows or stops because it creates an oxidation effect inside the beer.

So essentially, we need a way to get rid of the extra CO2 while also preventing oxygen, bacteria, and whatever else from getting into the beer.

This is the biggest argument for using an airlock during primary fermentation.

Of course, there are arguments for using other methods to let the carbon dioxide escape, namely a blow-off tube. That’s because while airlocks do a great job of letting gas out and none in, they are fairly restricted by the diameter of the tubing used to make them. If the pressure builds up faster than the gas can escape, or the airlock gets blocked with foam and yeast, you’ll have a big problem on your hands!

Why is an airlock used in fermentation?

The purpose of an airlock is to provide a safe and controlled way for the carbon dioxide produced during the fermentation.

Typically, airlocks are designed in such a way that you can put water or sanitizer into it so that any gas moving in or out will have to pass through the liquid. Since the fermentation produces so much carbon dioxide, pressure builds up inside the fermenter until it’s high enough to push through the liquid barrier and gurgle, bubble, or otherwise escape out of the time. The outside oxygen, meanwhile, will never have enough pressure to actually make its way back into the fermenter.

Here is an example of what I mean:

Hence, an airlock is the safest way to ferment beer and avoid unnecessary oxidation or infections to occur.

How do you put an airlock in a fermenter?

There are many different kinds of airlock, depending on their use, but the design of the airlock itself isn’t as important as how you can insert it into the top of your fermenter. 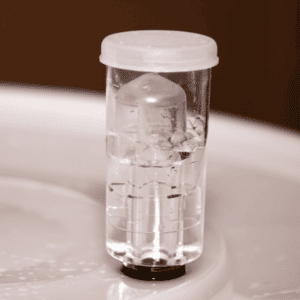 If you have purchased a kit with these pieces assembled for you then everything should fit nicely.

If you are creating your own setup and cutting your own holes then you will need to be careful that you have a snug fit with all of your connections.

Does fermentation need to be airtight?

In fact, primary fermentation should never be airtight because you run the risk of blowing the top off of your fermenter or breaking it completely. As carbon dioxide is created during the fermentation process, an incredible amount of pressure can build up over time. If the container is airtight, there will be no way for this pressure to be relieved.

Essentially, an airtight primary fermenter is a bomb waiting to go off!

Can you ferment without an airlock?

While airlocks are certainly super helpful, they aren’t required. As long as you have a safe way to let the CO2 escape while also preventing excess oxygen from entering then you’ll be good to go.

In fact, there is a strong argument to use a blow-off tube during the most active phase of primary fermentation because there is less chance that they will become clogged and lead to pressure buildup. Many homebrewers will start off with a blow-off tube and then transition to an airlock once things have calmed down.

What can I use instead of an airlock?

I’ve already mentioned a blow-off tube, but there are a few options that you can consider based on your situation.

If you don’t want to use an airlock, you could:

Still, airlocks are pretty darn cheap and it doesn’t make much sense to try and save a couple of bucks on this piece of equipment unless you have a  good reason.

Can I use a balloon instead of an airlock?

Some people have suggested that you could use a balloon as a poor man’s airlock. It’s pretty common to see this recommendation for homemade wine or mead recipes that are trying to avoid purchasing a lot of extra equipment.

While a balloon would probably work, it’s not ideal. If foam or yeast gets up into the balloon then it will likely just blow off the top of your fermenter anyway. Also, there is no way to add sanitizer into the balloon to keep bacteria from entering your beer after fermentation stops.

Still, it’s an option if you are in a pinch!

If you are interested in primary fermentation then you might want to check out a couple more articles that I wrote recently covering how to tell if your beer is fermenting and reasons why your beer might not be fermenting.

link to Does Fermenting Beer Need To Be in the Dark? (Avoiding Skunk)

Most homebrewers have been told that they should keep their fermenters and bottled beer in the dark to avoid skunky or lightstruck flavors but might wonder why this is the case. To help separate bro...

Most homebrewers bottle their early batches of beer and may wonder what carbonation drops are, how they compare to sugar, and how to use them. Since I had those same questions early on I decided to...

I've been homebrewing as a hobby for years and this website is a way for me to learn more about homebrewing and teach others along the way that are interested in brewing their own delicious beer!

This site is a participant in the Amazon Services LLC Associates Program, an affiliate advertising program designed to provide a means for sites to earn advertising fees by advertising and linking to Amazon.com. We are compensated for referring traffic and business to Amazon and other companies linked to on this site.