Hops are the female Humulus Lupus plant flowers that were originally used to help preserve beer before the industrial age. Dry hopping is the process of adding hops after fermentation to achieve a specific flavor profile but how long should they remain in the mixture?

Enough time must pass for the oils to extract from the hop media (e,g. whole leaf or pellet) and diffuse into the fermented liquid. It will take about 48 to 72 hours for this to happen and most guides don’t recommend going longer than 14 days,

Read on to learn more about how long you should dry hop your beer.

What is dry hopping?

In 12th century Germany, it was learned that the addition of hops to the wort boil helped preserve the beer. The boiling process would also evaporate the hop essential oils which would impart bitterness and aroma to the brew.

Dry hopping is the process of adding hops late in the brewing process. By adding in hops at the end of the boil, after flameout, or during fermentation (either primary or secondary), the beer will benefit from added hop aroma and flavor.

Since the hops were added dry, the practice became known as dry hopping.

What is double dry hopping?

In some instances, brewers will double dry hop (DDH) their beer to impart more aroma to the finished product.

Double dry hopping can occur at any point during the late boil or fermentation process but the hops are typically removed prior to bottling.

Another method is to double the quantity of hops in the recipe and let it infuse into the liquid in the recommended time.

In dry hopping, as the hops absorb beer, they start to release their own acids into the mixture. With whole hop products, this can take some time to fully absorb and sink into the container. Pelletized hops will mix easier with the liquid.

This is the reason why some brewers will dry hop for a few days while others will push it out to as long as 2 weeks.

To dive deeper into this topic, there are a few things that have to be taken into consideration:

Hops come in a variety of species. Each type has its own characteristics which can also vary based on growing conditions such as rainfall and soil acidity. Brewers can also mix different varieties of hops.

After harvest, they can be sold as whole hop, 1/2oz plug, or pellet form. There are other mediums but these two are the most common. Regardless of form, some brewers freeze them if they aren’t going to be used right away.

Frozen hops will still degrade although at a much slower rate. It is recommended that if you freeze your hops, try to use them within a few months.

How the hops are introduced into the beer will also factor into how long it should remain in the mixture. We will get into more detail further below when we talk about how to dry hop beer.

Finally, there are certain characteristics expected of types of beers. For example, if you were to order the Citiva hops from Midwest Supplies, they recommend it for someone looking to brew a hazy IPA, a pale ale, or Session IPA.

Can you dry hop too much?

Although dry hopping is popular, can there be too much of a good thing?

There is a danger in letting the hops sit for too long in the beer.

With whole hop products, as the plant itself breaks down it can start to impart a grassy flavor into the beer or cause unexpected reactions. Another problem is hop creep – a secondary fermentation that can create excess alcohol and CO2 to build up inside the brew.

Hop creep is caused by warm temperatures and long exposure which can lead to the formation of fermentable sugars.

How to dry hop homebrew beer during fermentation

For the sake of clarity, we’re going to turn to Midwest Supplies and refer to their recipe for a Brut IPA. The pdf file continuing all the steps can be found here.

This is a good recipe because it allows for the option to dry hop in the primary fermenter or in a secondary one.

Before dry hopping beer, you will need to take a gravity reading. Remember that dry hopping is technically supposed to happen after fermentation so you should be at or close to your expected final gravity.

This is step 17 in the kit recipe, which also lists a duration (2 weeks) and physical signs that active fermentation has ended. It recommends a “stable” reading, which means you should probably take at least two with 24 hours between readings.

In our Brut recipe, the amounts are measured out for a 5-gallon batch. That would mean 1oz of Nelson Sauvin and 1oz of Hallertau Blanc pellet hops.

You can also opt to use a bag or some type of container to keep your hops together and to make it easier to extract (more on that below).

Our sample recipe also says that dry hopping should be conducted 5-7 days before bottling. So you will need to choose this date and then schedule to add the hops at that time.

Once the date has been decided, you can dry hop in the primary fermenter (step 18).

The recipe also allows for dry hopping in a secondary fermenter but to allow for an additional two weeks (step 19).

What is the best dry hopping temperature?

The ideal temperature for dry hopping your beer is going to depend on your yeast strain. The live yeast will still be doing the work of converting sugar into alcohol and you don’t want to stop them from doing that.

Generally, the best dry-hopping temperature is the same as the ideal fermentation temperature, between 65-70 degrees Fahrenheit, but the exact temperature will depend on the yeast strain involved.

If you refer to the dry hopping recipe above (step 16), you will see that the optimum fermentation temperature is listed as 65-70 degrees Fahrenheit. There are no further instructions to cool or warm the beer for dry hopping.

Keeping the beer from getting too warm will also prevent or slow down hop creep (see above),

When should you start dry hopping?

Technically dry hopping is supposed to take place after the fermentation process but a lot of homebrewers will add the hops towards the end of active fermentation. Once you have a stable specific gravity reading you can proceed with dry hopping.

One technique is to place the beer into a secondary fermentation container. The hops are added to the secondary container and allowed to remain in the liquid until right before packaging.

Since there isn’t as much CO2 activity in this container, more of the aromatics remain in the suspension.

This method also allows the brewer to recover the yeast from the primary fermenter.

How much should you dry hop?

The standard hop amount per 5-gallon batch is usually 1 – 2 ounces but the popularity of highly hopped beers has thrown this standard out the window. Keep good notes and adjust as necessary.

For a “normal” level of hoppiness, start with the standard amount. For a very high hop flavor and aroma, you can go as high as 4oz. Make note of the results and see if you want to increase (or decrease) for your next batch.

Should you dry hop with pellets or whole hops?

This is a matter of personal preference as each form has pros and cons.

Whole hops are a little more difficult to measure and may require cutting to get the correct amount. They are easier to filter out but also take up more storage space. Pellets take up less space and are easier to measure out. They readily dissolve when added to the wort.

If using pellets in the primary fermenter, the breakup can cause CO2 to nucleate leading to an eruption of foam out of the container. Take care to add pellets slowly to make sure this doesn’t happen.

Do you dry hop in a bag?

A bag is sometimes used by brewers to keep the hops contained during dry hopping. The key thing to note is that the container you use must have an opening large enough to fit a mesh bag with hops.

These bags are made of a fine mesh material and can be purchased on Amazon or from home brewing suppliers. 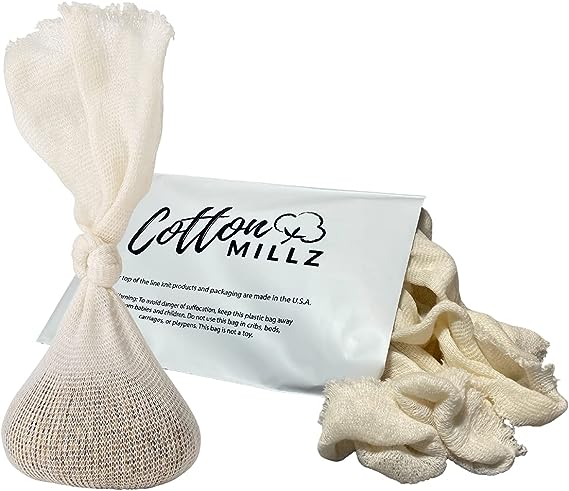 Easy to use, eco-friendly, and reusable (washable) muslin bags suitable for adding hops to the boil or dry hopping.

Each bag is 11 inches long

Buy Now On Amazon.com
We earn a commission if you make a purchase, at no additional cost to you.

Prepare the bag by thoroughly sterilizing it. You can either boil the bag or use a product like Star San.

Brewers will also use some type of weight like marbles or stainless steel weights to make sure the bag sinks to the bottom. If you use these items, make sure to sterilize them also.

Place the measured hop in the sterilized bag and weights (if any). Tie a simple knot at the end of the bag to keep the hop inside.

It can be hard to clean these bags after use. Some brewers prefer to use stainless steel tea infusers or mesh steel containers like this one.

﻿Holds up to 2 ounces of leaves; Works in a wort/boil kettle or in a keg for dry hopping

Buy Now On Amazon.com
We earn a commission if you make a purchase, at no additional cost to you.

Do you remove the hops after dry hopping?

Removing hops can allow you to reclaim yeast and maybe even reuse hops. This can be made easier when using containers (e.g. mesh bag) but there might still be particles to deal with.

If you have used whole hops or plugs to dry hop, a simple sanitized mesh screen at the end of your dip tube will keep the larger particles out while you package the beer. Finer particles might still get through but you will have to decide if further filtration is necessary.

Pellet hops, even if contained in a bag, can still escape and leave a sludge at the bottom of the container. Brewers have doubled up the sterilized mesh screening in their siphon in order to keep the sludge out of the final package,

For the web story version of this article click here!