For many homebrewers, the sight of yeast floating in their beer can be off-putting or even alarming. Most people who are new to homebrew or craft beer may find themselves wondering why yeast sediment is there and if it’s okay to drink.

Yeast is generally completely safe to drink and beer and may even provide certain gastrointestinal health benefits for some people. Yeast is generally filtered out of commercial beer except for craft breweries that leave it to can or bottle condition their beers.

If filtering your beer sounds like too much trouble, it’s usually okay to leave it alone. Because everyone’s body is different, yeast affects people in different ways, but in most cases, it is perfectly fine to drink. Read on to learn more about why you find yeast in homebrew, its pros and cons, and tips for removing it or avoiding it if you wish.

Is it safe to drink beer yeast?

Unless you have a yeast allergy, yeast is perfectly safe to drink. Studies indicate that the bacteria in our stomachs have evolved over time to be able to effectively digest yeast. These bacteria, called B. thetaiotomicron are found almost exclusively in human digestive systems and help us convert brewers yeast into nutrients.

Yeast is a natural part of our microbiome and helps keep our immune systems strong and our digestive systems running smoothly. According to Verywell Health, it is sometimes even “used in alternative medicine to promote digestive health and is believed to treat a number of health conditions, including colds, flu, diarrhea, and diabetes.”

It’s important to note that drinking homebrew or commercial beer means consuming not just yeast, but alcohol and other components as well.

Because of this, simply drinking beer should not be considered a ‘treatment’ for any known health condition. That said, its yeast is usually working in perfect harmony with our stomachs.

Can the yeast in beer make you sick?

Yeast allergies are quite uncommon. According to Healthline, people with yeast allergies represent only a tiny fraction of the more than 50 million Americans with some kind of allergy.

Symptoms of a yeast allergy include:

Talk to a doctor if you experience any of these symptoms after consuming beer, bread, vinegar, or other foods containing yeast.

What happens if you drink the yeast sediment?

Though digestive and other health benefits from consuming yeast are numerous, that’s only true if consumed in limited amounts.

Your gut can easily digest a few beer’s worth of yeast and turn them into valuable vitamins and other nutrients, but like anything, don’t overdo it. If you consume too much yeast, you may get gas.

The same fermentation process that occurs in your homebrew can happen in your gut if you consume live yeast. Though this can cause uncomfortable bloating, unless consumed in excess, it is usually not cause for alarm.

Other potential side effects of consuming large amounts of yeast sediment are diarrhea or an upset stomach.

Again, these symptoms normally pass but talk to a doctor if they become severe.

Why is there yeast in beer?

As a homebrewer, you’re probably aware of the vital role yeast plays in the fermentation process.

When yeast is added to cooled wort during the beer brewing process, it begins to eat up the sugars, converting them into alcohol and carbon dioxide during an activity called fermentation. This yeast mostly settles to the bottom of the fermenter, but often still ends up in bottles of homebrew.

So how come when you open up a bottle of commercial beer you don’t see the same amount of stray yeast floating around?

The answer is filtration and pasteurization.

By pasteurizing their beers and removing the yeast, commercial brewers can extend their shelf life and reduce the risk of spoilage. For those brewing and distributing at a large scale, this means increased consistency of their products.

Pasteurization involves heating the beer to neutralize bacteria, which also neutralizes yeast. The pasteurized beer is then filtered to remove the dormant yeast, and any other sediment.

Some smaller craft breweries choose to let live yeast remain in their beer to bottle condition them. Including live yeast in bottles means that fermentation will continue, albeit at a smaller scale, in each bottle or can of beer, ensuring strong carbonation. This is why you’re unlikely to find sediment in a large commercial beer like a Budweiser, but may find it in a bottle from a smaller local brewery.

For some homebrewers, the yeast that ends up in the bottle affects the taste of their beer. This can vary based on the type of yeast used and the style of beer, but there are ways to remove that yeast, even if you are bottle conditioning.

As a homebrewer, there are two easy ways to limit the amount of yeast in your finished product if you choose to. You can either filter it out during the bottling process, or try to avoid it while pouring out of the bottle.

Generally, there are two practical ways to remove the yeast from your beer and avoid drinking it:

Let’s see what both of those options look like.

It can be beneficial to filter out yeast before bottling your homebrew. In addition to making for a more pleasant mouthfeel, it also can lead to better flavor, more true to your intended recipe.

There are several commercially available filters available for filtering homebrew during bottling. An inline filter like this filters beer between your bottling hoses. 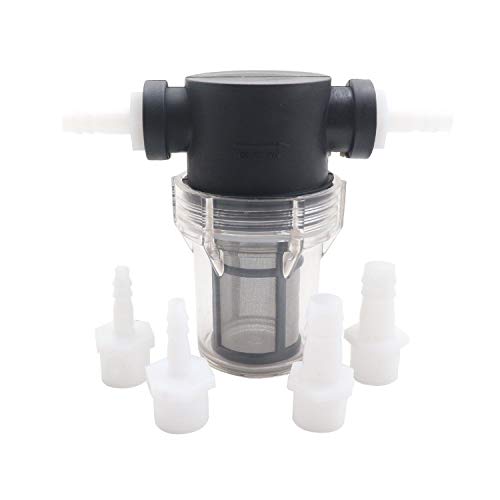 To filter out yeast from homebrew with an inline filter, simply attach the hose from your fermenter to one end and the hose to your bottles on the other end. The filter will actively filter your beer as it passes through without any additional effort from you.

For this method to work, your fermenter should have been sitting still without being moved or jostled for several hours if not days to ensure the yeast has settled.

Pouring off beer to leave yeast behind in a homebrew bottle

Any bottle or can conditioned beer will have some amount of sediment in each bottle. It’s not easy to avoid when drinking straight from the can or bottle, but pouring the beer into a glass can help. Most beers taste better poured into a glass anyway!

There are plenty of videos like this one that can show you how to pour a perfect homebrew.

Everything you need to brew 5 gallons of beer at home including full step-by-step instructions!

Buy Now On Amazon Buy Now On Morebeer.com
We earn a commission if you make a purchase, at no additional cost to you.